Up until the World Wars, people who left communities were oddities. People grew deep roots in their community; in the case of Métis communities, these roots even predate the arrival of European Settlers.

Voyageurs, well, were travelers – yet as we’ve seen in records, they came back, they kept ties with their kin and their communities. These connections survived through many generations, despite the difficulties in communication. The postal service was a lifeline between kin. Many pints of maple syrup made their way West while lots of Serviceberry Pellican (how us kids called Pemmican) made its way East.

Kin were remembered by nicknames, stories, songs and tall tales; as time passed, everything was embellished and exaggerated to keep the listener enthralled and ensure the story was passed down to the next generation. Yet, the tales stayed true enough that if you did meet the subject in question, you instantly recognized them and felt like you’d known them forever.

By the early eighties, which coincides when the beginning of modern technologies, most of our town folk who were the storytellers had left us. As time passed, the stories became more and more doubted and modern day amenities made the idea that it was possible to keep connected became seen as ludicrous. Funnily enough, before technology, we had no way of verifying these stories – yet we knew them to be true. Today, we’re programmed to see everything through the fake news lens.

It always give me a thrill me when someone who I don’t know personally, but with whom I share many kinship connections, shares stories we’ve both heard from different yet common sources.

Here is one case. This picture and story was posted by Mrs Viviane Roberge, who maintains a wonderful Facebook page about events past and present of the town of St-Gabriel de Brandon, where I was born.

Most of these names are all very familiar to me: although not direct ancestors, Celina Corriveau and Calixte Courchesne are the grandparents of my uncle, Rolland Desrochers. We are related through his wife, my aunt Jeanne Mathews.

Aunt Jeane and Uncle Rolland at their 50th wedding anniversary celebration in 1986
I had the pleasure of spending many of Summer vacations with Aunt Jeanne and Uncle Rolland. Although they had moved down to Florida back in the 50s or 60s, they came back almost every Summer and stayed with my grandfather while they visited with their respective families. Uncle Rolland’s brother owned the garage in town and the family was well-known hotel and shopkeepers.Uncle Rolland’s family were seasoned travelers. Like many families from our community, they had been to many places, like the Voyageurs our ancestors all were. Uncle Rolland regaled us with stories of cousins they’d meet during their many travels in a succession of fancy home on wheels.Uncle Rolland’s grandfather Calixte Courchene had left St-Gabriel de Brandon several times, going as far South as Lowell, Massachusetts before setting roots West in the Temiskaming town of Lavigne, where Calixte passed away in 1940. His son Télesphore made sure that all of Calixte’s six wives were named in his burial record. 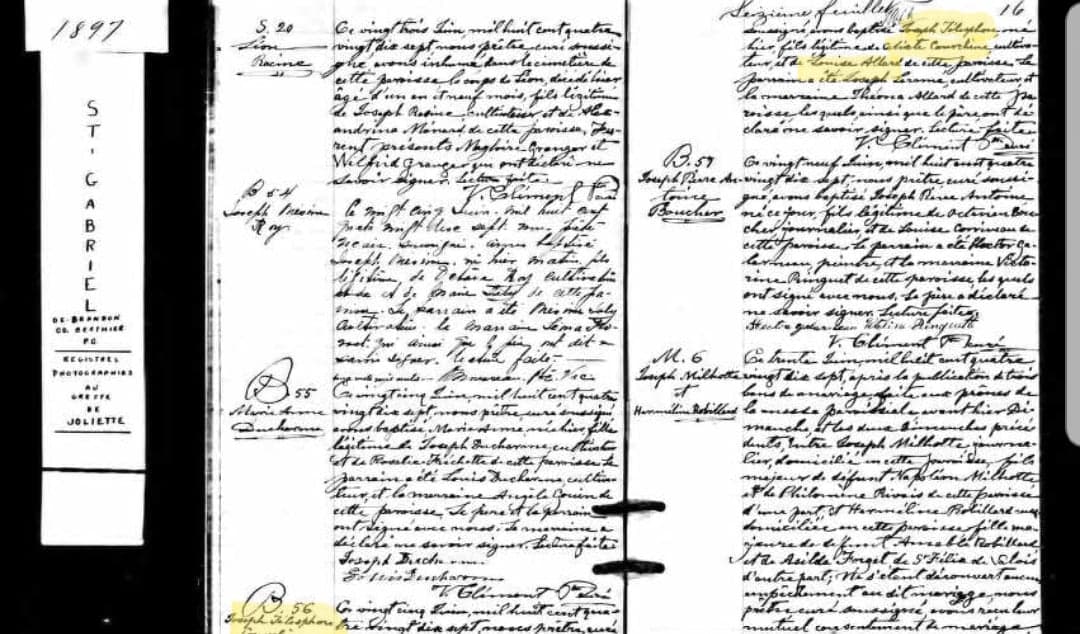 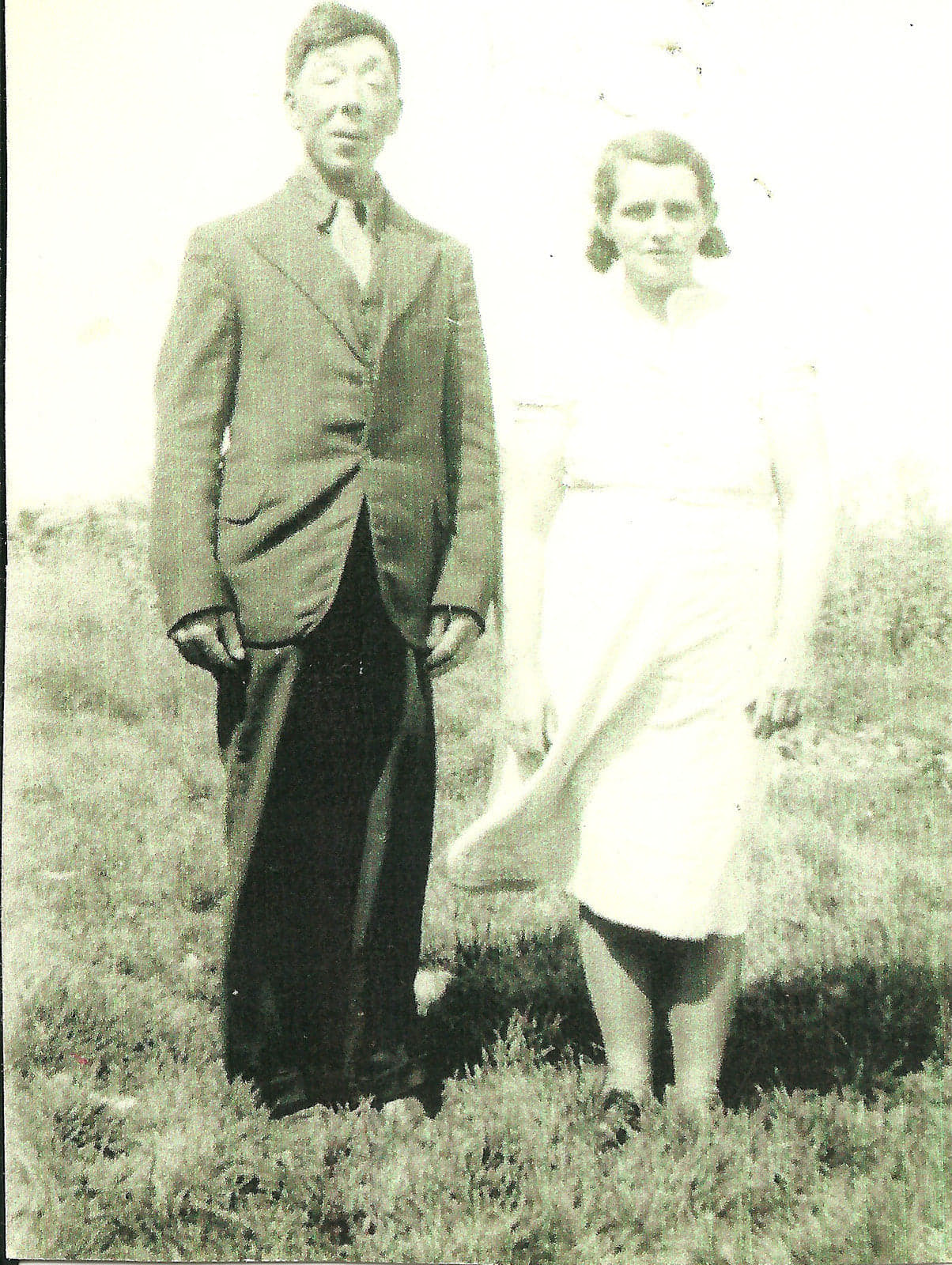 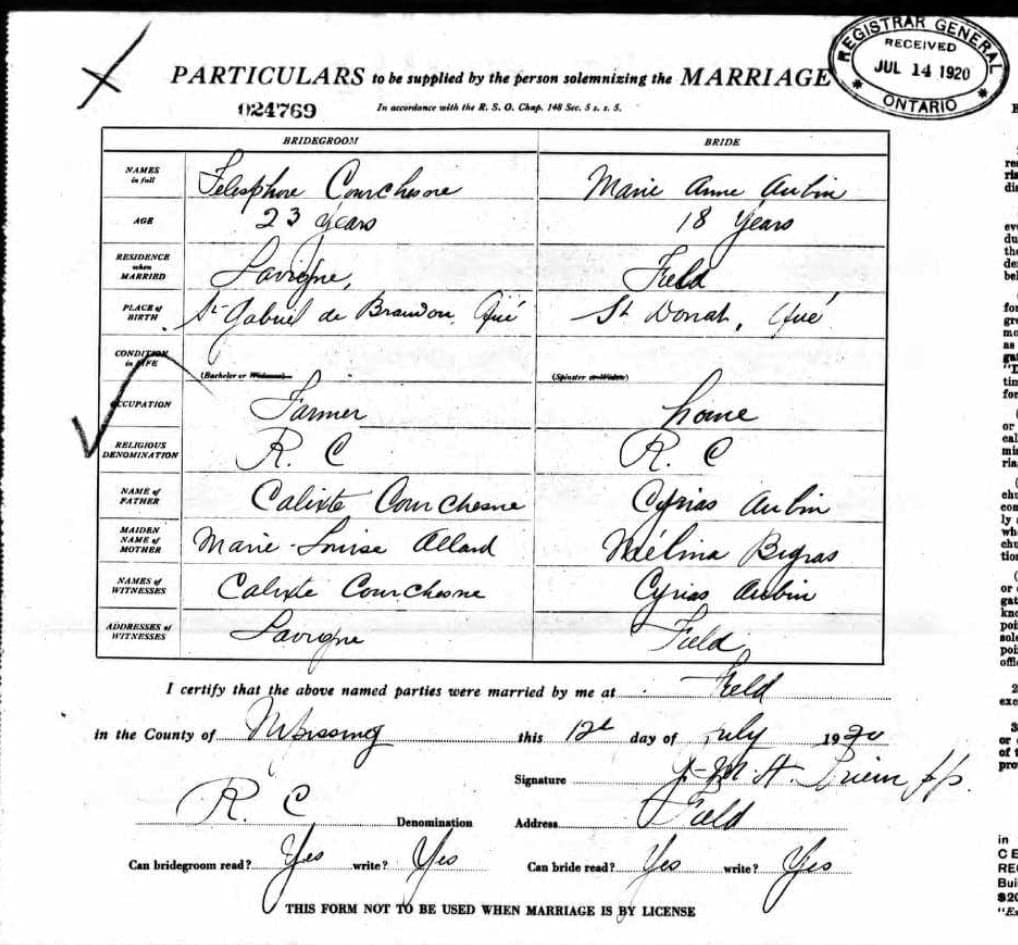 Télesphore married Marie Anne Aubin in 1920. Himself recognized as a Knowledge Keeper by the Centre franco-ontarien de folklore: https://www.cfof.on.ca/porteurs-de-tradition.One son, Narcisse, followed his father’s footsteps and became the region’s Knowledge Keeper. He published over a dozen books on the region of West Nipissing and is also co-founder of the Sudbury Area History and Genealogy Society. Having become an expert in this field, he helped several members of his community produce their family trees and obtain their Métis cards.

Until Mrs. Viviane Roberge posted in her group St-Gabriel de Brandon, d’une génération à l’autre, I had no idea of this Knowledge Keeper’s name, but I had heard stories of Uncle Rolland’s cousin who even made the trip all the way back to the Chicot to visit his father’s birthplace.I wish I knew this when I had the absolute privilege to visit the area at the invitation of members of Parliament Marc Serré of the riding of Sudbury and Paul Lefebvre of the riding of Nickel Belt back in the Summer of 2017!

If you are related to Calixte, Télesphore and Narcisse and would like to chat about our communities, please drop me a line!